This data sets includes news reports from international press agencies for the year 2013. Trending topics are dominated by financial data and events (such as the appointment of new fed officials), and sports, but trending topics also include the algeria gas plant attack, the Boston marathon explosions, the Moore tornado in Oklahoma, the Lance Armstrong interview, Iran nuclear power deal, German elections and many more. This is probably the most interesting data set, albeit it would be beneficial to add a categorization/classification step to the analysis process on the long run.

Twitter data covering mid February to end of May. We analyzed the Spritzer (1%) feed, keeping only English language tweets. We removed obvious spam (near-duplicates) as well as all retweets (which do not add new text). For stemming we used a porter stemmer, and decided to deliberately ignore all #hashtags and @usermentions. Ignoring hashtags produced much more interesting results (some teens like to spam their stars, but do not use a lot of text).
This data set is now packed with media events: VIPs going out of jail, dieing from a fatal overdose, a year-long illness, pneumonia, or peacefully at the age of 88, while others were banned from the NBA. A girl threw a shovel in a catfight, mercer upset duke in the march madness, there was a blood moon, earthquakes in chile and los angeles. We are also missing an airplane and a bearded woman won the Eurovision song contest. It's all in there: brit awards, the Oscars, soccer, game of thrones, april fools, pi day (03/14) and a little bit of spam ("#votekatniss") our primitive filters did not yet catch.

We processed all non-deleted questions posted on this programming Q&A site (probably the largest site of this kind on the Internet). However, as programming problems occur all year long, there are not that many trends to detect in this data set. The most notable events detected include New Year and Christmas (on these days, many users include a seasonal greeting in their question) and the day after the release of some major software or web site (OSX Maverick, iOS 4/5/6, Android Studio, Meteor, ...) - nothing very spectacular, but a reasonable proof of concept. Shortly after that, there are some statistical false positives: by monitoring thousands of keywords over thousand days, there ought to be some 3 sigma significant false positives in the data (it's real data - these things happen).

This data sets includes news reports from international press agencies for the year 2014, with financial news and some sport tickers removed. Top trends include MH17 being shot down over Ukraine, MH370 disappearing and U.S.-Cuba relations improving.

(The final version of the article is not yet available - please attend the KDD conference!)

The basic approach used is to use exponentially weighted moving averages (EWMA) to model the expected number of occurrences. In order to rate how significant a trend is, we also model the variance in pretty much the same way (be careful to have a good numerical precision).

Of course there are some tiny bits to calibrate: the first occurrence of a term would have "infinite" significance. Therefore, we need to assume some background noise or thresholds to bias our results to only capture trends that both have substantial volume and significance.

As usual with text mining, we had to do a lot of preprocessing - too much to give all the details here; but it is all average textbook stuff.

In particular, we performed stemming to merge different versions of the same word (i.e. explosion, explodes, explode all become "explos") removed stopwords (words such as "the") and for the Twitter data set, we also ignored all retweets (which require little user activity and add little value for our analysis) and near-duplicate tweets (which are very often Spam tweets).

We did not yet use actual NLP techniques such as entity extraction. We are convinced this will further improve the results, but we did not yet have the time to try this.

Looking at a single word may be not enough. Certain words occur all the time.

This is probably best explained by the "Boston Marathon Explosion" example: each of these words occurs a lot. In Boston, there is always something newsworthy happening. And in financial data, things also like to explode: markets explode, shares explode, prices explode ... and of course, people like to run marathons all over the world.

In order to detect interesting events, it may be necessary to look at more than one word at a time: the combination "boston" and "marathon" was much rare; "marathon" and "explosion" did not occur in the data at all prior to the attack! For most events, there will be such a combination of words that is nearly unique. And while there are many Georges and many bushes, the combination is also much more specific.

If you inspect our data set, you can find that boston and explosion achieved a significance of about 9, whereas explosion only obtained a score of 4.

To be able to scale this approach to "Big Data", we implemented a hashing-based approximation strategy. Our approach is heavily inspired by heavy hitter algorithms, which have low precision at rare elements, but next to no error on frequent terms. Except that we do not only track counts - as we are not interested in the most frequent terms - but also their variance. This way, we can detect trending terms efficiently, with constant memory usage.

A key contribution of our work is to go beyond the most frequent items, and instead track those terms who show a substantial increase in their usage.

Hash table sizing: if the hash table were too small, we will lose precision, and may miss low-magnitude trends. If we make it really big, we need a lot of memory and runtime. But it turned out that a fairly moderate size works for all our data sets.

The word cloud in the bottom half is much smarter than regular word clouds: the different colors indicate clusters, and words that trend together are connected by lines.

One could probably write a separate paper on how to construct such a word cloud - cooccurrence and Jaccard similarity are used for clustering and similarity measurement. The data is then projected into two dimensions using multidimensional scaling, and a force directed graph is used to prevent words from overlapping too much.

So far, this is heuristic and more a fun visualization feature than an actual contribution of our research, although there seems to be quite some interest in how we did this... 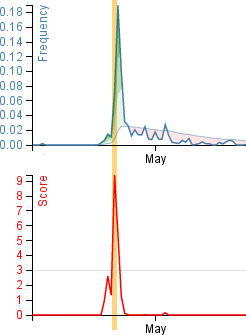 For each trend, you can see a time series chart consisting of two plots. The upper plot visualizes the frequency of this term or term combination. The thick line is the observed frequency, the thin line indicates the moving average, and the colored areas indicate standard deviations.

In the lower plot, the significance of the trend is visualized. Most of the time, this will be 0 - no trend. Significant trends will be much larger than 3 standard deviations, indicated by the grey horizontal line. In this example, we observe a trend with over 9 sigma significance.

The current point in time is indicated by the yellow vertical bar.

Getting the Code (Sorry, not yet available)

Getting the source code useable by others is a work in progress. We plan on making the source code available at some point - just like we did with our data-mining toolkit ELKI - but we are not yet ready for this. We're too busy to building this into a much larger tool, which will become actor-based, and get a lot of the functionality you would expect to have.

Stay tuned. We will really try to make this available to you for experimenting!

All authors are members of the Database Systems Group at the Ludwig-Maximilians-Universität München, Munich, Germany.

Dr. Erich Schubert recently completed his PhD in outlier detection, and seized this opportunity at widening his research domain to textual data. He is looking for positions to continue his academic career.

Michael Weiler just started his PhD research in the group, and will focus on detecting trends in text; both from streaming searches and as interactive environment.

Prof. Dr. Hans-Peter Kriegel is the head of the group and advisor of both, giving the overall research direction, experience and - most importantly - finding the right people to work together to make the magic happen.

Please select a day in the chart below.

No trends available for this day.

Click on a word to see its detail chart.